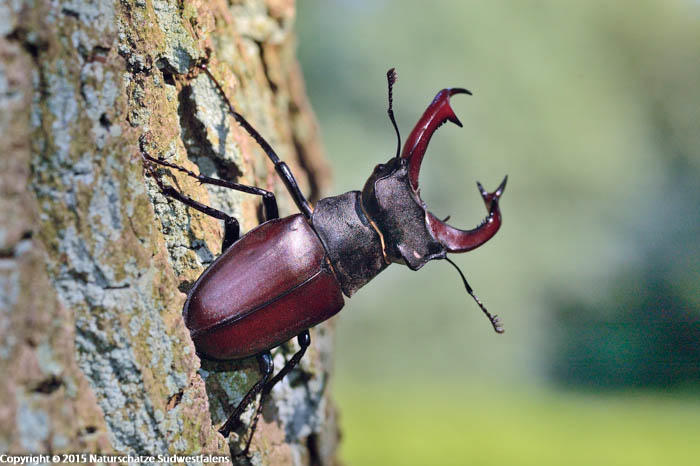 With around 350,000 species, beetles are the most diverse group of insects. When closed, their forewings usually cover the abdomen as a hard shield. The membranous wings are folded in beneath that shield. The typical three-part insect body is often not easy to see at first glance in beetles. Part of the breast is covered by a pronotum or thorax plate, behind which the cover wings are attached.

Beetles colonize a wide variety of habitats. Some species, such as the Great Diving Beetle, even live in the water.

Ground beetles usually have an elongated form and long legs, which make them very mobile. Although most species can fly, there are also flightless species. The native, bright green coloured Green Tiger Beetle is an agile runner and good hunter, preying on arachnids and small insects. It can fly only short distances. Green Tiger Beetles prefer open or only sparsely-covered areas on sandy paths or sunlit slopes. Their larvae bury themselves up to their heads and lie in wait for prey.

Many species of beetle are dependent on wood as their habitat. Prominent among these are the distinctive longhorn beetles with their long antennae. As their larvae generally feed on wood, these beetles are feared as pests, particularly the House Longhorn Beetle and the introduced Asian long-horned Beetle.

The Great Capricorn Beetle can be more than 5 cm long and is thus one of the largest beetles in Central Europe. Its larva lives for about 3 to 5 years in old, often already dying oaks. This species remains faithful to "its Oak" for generations. The Stag Beetle is also a species of old Oak forests. Up to 7.5 cm in size, the males are the largest beetles in Central Europe. Its imposing so-called antlers are formed by the mandibles. The larvae develop in dead wood, especially oak, and can be up to 11 cm long. They take up to 8 years to reach the pupal stage. Most of our beetle species that rely on old trees or dead wood are now endangered, because in our modern commercial forests there is very little space for old and dead trees. These beetles are therefore protected species.