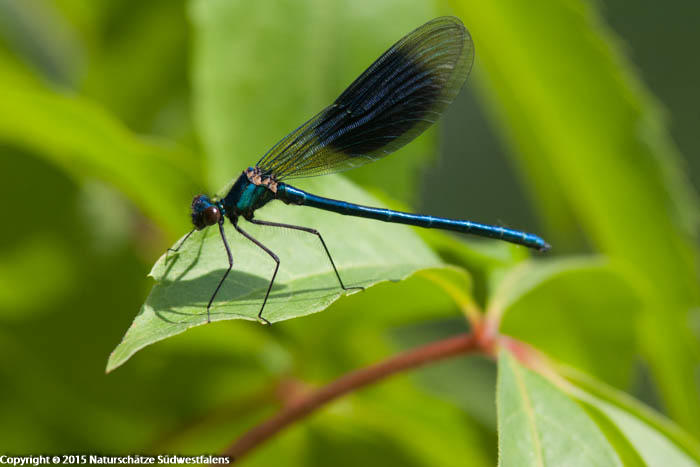 Most species of dragonfly and damselfly prefer standing water habitats. However, there are also species that are specially adapted to the near-natural streams of the low mountain ranges. Their larvae live between the stones of the stream bed, where they feed on other insect larvae, small crustaceans and worms. Depending on the species, the development to adult stage takes between three months and five years. As an adult, on the other hand, they often live only between two and six weeks.

The calopterygidae or broad-winged damselflies are among our most beautiful and largest damselflies. The males have shimmering metallic blue-green bodies. Two species occur here. The wings of the male of the Beautiful Demoiselle (Calopterix virgo) are a solid blue colour, whereas in the Banded Demoiselle (Calopterix splendens) the tip and the base of the wings are not coloured. The females of both species have bronze-coloured bodies and brown wings.

While the Beautiful Demoiselle more often populates the small, cool, clean streams of low mountain ranges, where sunny and shaded sections alternate, the Banded Demoiselle is more a species of slow-flowing streams with a sandy bed. It is therefore more likely to be found in the lowlands. Calopterygidae have a distinctive courtship behaviour. While the male guards the egg-laying female, she injects the eggs into living plant material that has been previously marked by the male.

Rarer, but more impressive for that, are the two black-and-yellow, green-eyed Cordulegastridae dragonflies (spiketails). They are recognisable as dragonflies by their outstretched wings when at rest. The scarcer Sombre Goldenring colonises the source regions of streams. The somewhat more frequent Golden-ringed Dragonfly is more often found below the source region, together with the Beautiful Demoiselle.

Stream dragonflies are threatened by straightening, deepening and piping of streams and by silvicultural measures such as the cultivation of Spruce. The above four species are therefore protected by law.