Oases in our landscape 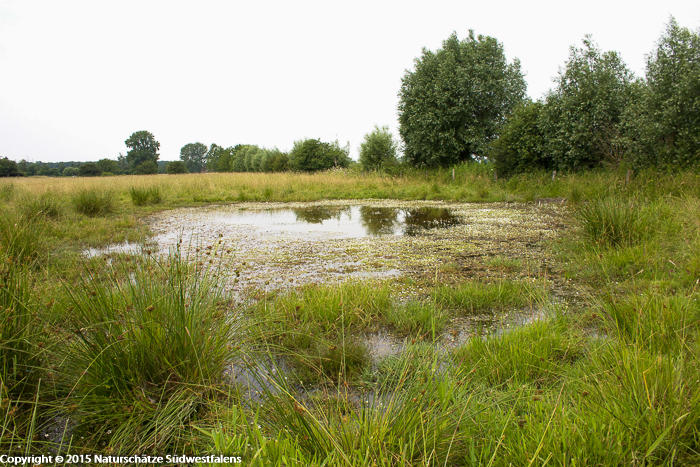 From puddles right up to lakes

The larger standing water bodies of South Westphalia are man-made dammed lakes such as the Möhne or the Bigge, or lakes resulting from gravel extraction like Lake Zacharias. These offer many water birds resting and breeding places. At Lake Möhne, for example, a wide range of birds can be seen, including Grey Herons, Mallard and Pochard, Coot and several species of grebe. Cormorants can be encountered in large numbers here and on Lake Zacharias.

Natural bodies of standing water in South Westphalia are usualy smaller, such as ponds, pools and groundwater ponds. Old sections of a river or stream that are cut off from the flowing watercourse are called backwaters or old arms. A pond or pool may permanently bear water or occasionally fall dry. Groundwater ponds - very shallow bodies of water, often a man-made scrape, usually dry out completely in the summer.

Bodies of standing water have an important role as habitat for numerous animal, bird and plant species. Amphibians spawn there in the spring, while fish, dragonflies and other insects live in or at the water. Numerous species of bird, such as various duck species, Coot and warblers live in the surroundings of standing water bodies. In particular, the shallow groundwater ponds in the floodplains are a magnet for migrating birds. In the soft ground in and around the water, they can poke around for worms and insects. This is how they regain the energy needed for flying the further migration route.

Many species, such as the rare Yellow-bellied Toad, rely on small water bodies that dry up in summer. It is only in such waters that they can survive against more competitive species. The only intermittently water-bearing pool or even really small puddles have the advantage of being free of fish and of warming up faster in spring.

Macrobenthos creatures also occur in ponds and pools, i.e. standing waters, but they are different to those species occurring in streams and rivers. In standing water bodies, the water warms up more in the summer and therefore contains less oxygen. The creatures thus either have to make do with less oxygen, or have to actively obtain oxygen. Some bugs and beetles come to the surface and take an air supply back down with them in the form of a bubble. Others, such as mosquito larvae, hang below the water surface and breathe through a snorkel-like tube.