A carpet of purple flowers 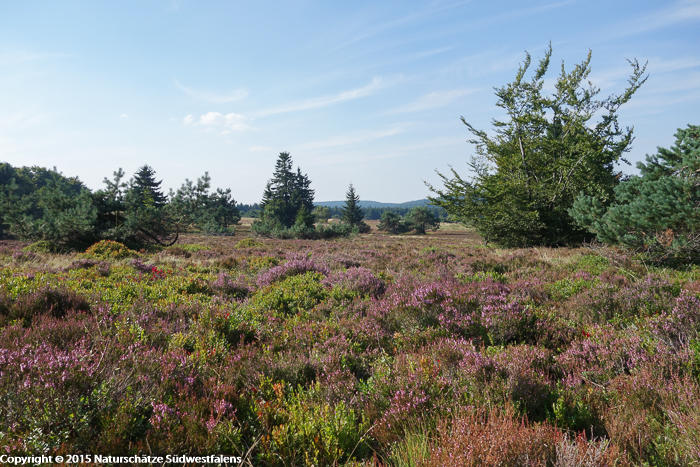 A habitat for specialists

The term "heath" stands for an open landscape covered by dwarf shrubs. It occurs on nutrient-poor and acidic soils. The plants here cope well with dry soil and high winds. The characteristic species are Heather, Blueberry and Lingonberry.

Originally, heaths were to be found only in naturally forest-free locations such as coasts, moors and mountains. The heaths of South Westphalia resulted from human use of the land. Forests were felled and the land used as communal pastures for livestock. The dwarf shrub vegetation that established itself in such areas was also promoted by so-called plaggen cultivation. For this, the top soil was peeled off and used as litter (bedding) in the animal stalls. After the winter, the litter enriched with animal excreta was scattered over the fields as fertilizer.

With few exceptions, heaths are man-made landscapes that only survive if they continue to be used and maintained. To prevent the emergence of woody plants, heaths are usually grazed by sheep and goats. However, in some areas old cattle breeds are also used. In addition, targeted burning is carried out in some heathlands, or the top soil layers are mechanically removed. The aim of these measures is to enable the heather to regenerate.

Where juniper grows on the heath, one speaks of juniper heathland. At altitudes over 600 m above mean sea level mountain heaths develop.

After heathland farming came to an end, many mountain heaths were lost. Today, only a few survive in South Westphalia. These are only preserved by means of selective protection and care measures. A heath is particularly impressive in late summer or early autumn, when the heather is in full bloom and covers the landscape like a purple carpet.

Heathlands are important habitats for numerous animal and bird species, including the rare Woodlark. Where occasional trees provide perches, Red-backed Shrike and Great Grey Shrike also feel at home. But heaths are especially important for the insect world. Bees, butterflies, beetles and grasshoppers use the warm, open and flower-rich habitat in large numbers.