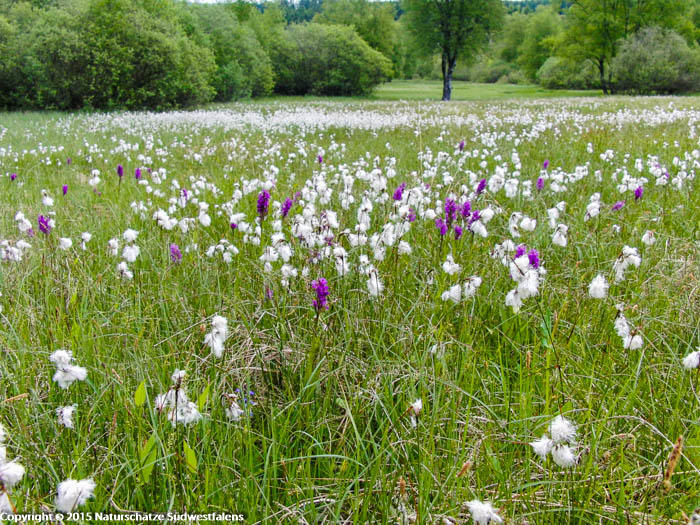 Climate protection and habitat at the same time

Moors are sensitive and easily destructible ecosystems which – in global terms – are of great importance for the climate. Although they cover only 3% of the land area, they bind about 30% of the atmospheric carbon dioxide.

The common feature of all moors is a more or less deep layer of peat. Peat is made up of undecomposed or only partially decomposed plant remains. The plants cannot be completely decomposed because the soil is saturated with water, so that there is a lack of oxygen.

The development begins with the formation of low moors. In a low moor the layer of peat still has contact with the groundwater. If the layer of peat becomes so thick that it loses contact with the groundwater and is fed only by rainwater, a raised bog has developed. Low moors are somewhat richer in nutrients and are populated by more species, such as reed and fen sedge as well as various species of rush and moss. Raised bogs, which are extremely nutrient-poor and acidic, are dominated by sphagnum mosses. The peat body only grows about one millimetre a year. The development of a peat layer that is several metres deep thus takes several thousand years.

Spring moors and slope moors are varieties of low moor. In South Westphalia they occur as slope low moors in the low mountain ranges. Slope moors and spring moors are formed where spring water uniformly emerges from the surface of gently sloping hillsides all the year round. In the area around the spring, the peat body is permanently saturated with water, so that a relatively deep layer of peat may be formed. At a greater distance to the spring, the depth of the moor soon decreases.

Swamp moors are low moors that are formed in the hollows, depressions or river floodplains of a slightly undulating landscape. North of the Hellwegbörde, not far from the glacial valley of the River Lippe, quite large swamp moors developed. Early in local human history, people began to drain these moors in order to obtain grassland and arable land for agriculture. The extraction of peat caused further destruction of the moors. Today, only small remnants of the swamp moors are left in the Hellwegbörde. These remnants are of particular value from a conservation point of view, since the high lime content of the local soils caused them to develop into rare calcareous low moors.

In the northern German lowlands – formerly among those regions of the world with the greatest area of moorland – the use of peat as fuel and the reclamation of moorlands for agricultural use has meanwhile largely destroyed the moors. From the perspective of nature conservation a destroyed moor is irreplaceable. Intact moors are now extremely rare and are under European protection.