The dynamics are crucial 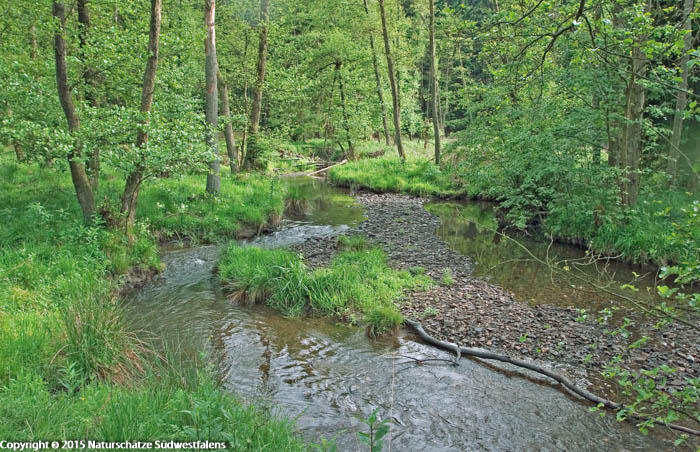 A watery network criss-crosses the landscape

A network of streams and rivers runs through South Westphalia. Many of the streams, especially in the highlands are still quite natural in their structure. But rivers and streams were tamed very early by man. They were straightened, narrowed, and thus deprived of their dynamics. Numerous weirs and culverts made stretches of the habitat impassable for its inhabitants. Floodplains were drained and given over to intensive agriculture, often even built on. The agricultural use led to serious pollution of the water with fertilizers and even pesticides. Industrial effluents were often discharged directly into the rivers. Many plant, animal and bird species disappeared from our water courses.

In recent years, many streams and rivers have been restored. This has enabled the development of near-natural sections of the watercourses. They are characterized by a long, winding course with a richly-structured riverbed. Once again, the water abounds with numerous insect larvae, crustaceans, mussels, snails and fish. Fish eaters, like the Kingfisher and the Black Stork, and insectivores like the Grey Wagtail and the Dipper find plenty of food here. In the low mountains, sparse Alder forests line the streams, giving way in the lowlands to softwood riparian forests or species-rich meadows and pastures.

The bed of streams and rivers is the habitat of many smaller organisms, the so-called macrobenthos. This term covers all bottom-dwelling creatures that can be seen with the naked eye.

Very diverse groups of species are represented here, for example, worms, leeches, snails, small crustaceans such as freshwater shrimp, and insects such as bugs and some beetles. These creatures live their entire lives underwater. The various underwater insect larvae are different: their adult stage leaves the water. Such insects include various mayflies, dragonflies stoneflies, caddis flies and mosquitoes.

The organisms of flowing water are generally very oxygen-needy and place high demands on the cleanliness of the water. Upland stream beds consist of gravel and stones. The myriad of gaps between them provide homes for innumerable water creatures.

The species of fast-flowing water have developed interesting adaptations for life in the current. Some are perfectly flat and cling to rocks, other have suckers or rings of hooks with which they cling to underwater objects in strong currents. Caddis larvae build protective cases made of stones or pieces of wood. The macrobenthos creatures are extremely numerous. They constitute the food basis of freshwater fish. The native Dipper is a true specialist in searching the stream for insect larvae.